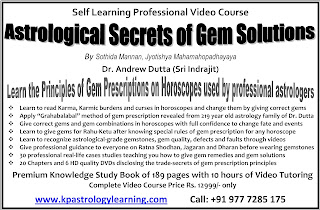 Posted by Journal for Advancement of Stellar Astrology at 2:12 AM No comments:

Gem remedies and solutions dont depend on theories and beliefs

Today, BRGJ forwarded me an email which was as below:

Sir,
I requested prof. .....ji  to opine on gems theory.According to him k.p.theory has no trust on gem theory.so what should I do?

The following was my reply to him:


Dear Mr. Modi,
Thank you for your email.
It has been since 1997 that I have been dispelling many myths and untruths about KP and late KSK ji.
One such myth is that KSK ji did not believe in gems and remedial measures.
I have been showing in JASA through Astrology & Athrishta Magazines that KSK ji was not a disbeliever of remedial measures.
When I met Mr. Hariharan ji's eldest brother, Mr. Ganapathy--the eldest son of KSK ji--in Nacharam, Hyderabad at CCMB quarters where he used to stay in his daughter and son-in-law's house, we had quite some elaborate discussion on KSK's belief in gems and remedies. When KSK ji died in 1971, Ganapathy ji was almost an adult and other brothers were not even adolescents. I have family photograph also. So, what the eldest brother picked-up from his father was more valuable and true to me.
One such small bit I have shown in my new video course on Gems.
KSK ji had told his elder son about the basics of gems in KP and how it can be possible. This I have revealed in the video course--a bit----though I was told fully by late Ganapathy ji what was the original thinking of KSK on gems and KP. Unfortunately, after KSK ji's demise in 1971, the entire KP theory could not go forward and today we have all sorts of garbled systems in the name of KP.
Now a second thing.
If someone or a group does not believe in gem solution, that is fine. And that does not stop gems or planets in giving results. If tomorrow I start believing that Sun does not give light, it does not mean Sun will stop giving light. Reality remain unchanged despite our beliefs. Just like those people who do not believe in astrology does not make astrology any bit lesser than a science.
Now a third thing.
This gem course is not on KP theory. It is our 219 year old astrological family's method of gem prescription that has changed many many lives. It is based on a very simple Parashari technique that anyone who knows how to operate a simple computer software can look at the horoscope and use our family's Grahabalabal method to identify the correct gemstones required.
That is why this video course has been called as 'premium knowledge' and the price is high.
Now your question "What should I do"?
If you want to know the truth of the cosmos, you must pull up your yourself higher than theories and controversies. You should learn varied types of knowledge about astrology, God, Karma. You should do good Sadhana. Only when you will rise above this mortal plain, that you will be able to see the light of God "jyoti" of "Isha" --jyotisha and you will then become a Jyotishi.
Whether you want to buy my course or not is a very small thing of life and you can best decide that yourself and I dont need to become a salesman....ha ha ha....


Posted by Journal for Advancement of Stellar Astrology at 8:19 AM No comments:

Your lifelong wait for the best knowledge on astrological gem solutions is finally over now !! 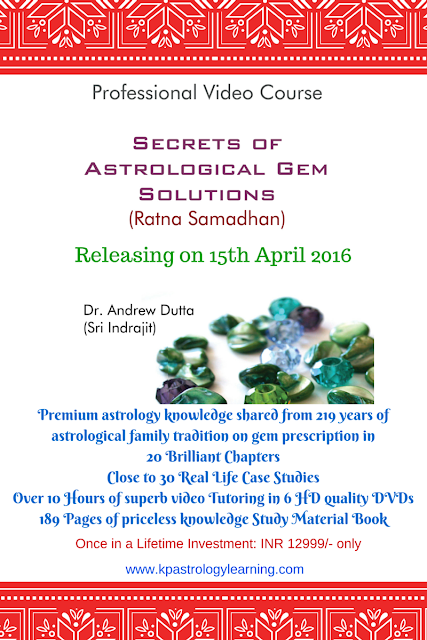 Posted by Journal for Advancement of Stellar Astrology at 11:25 AM No comments: